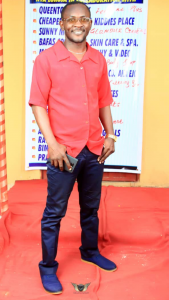 To mark this special day, ANSA will be having a one-of-a-kind literary contest.

The contest is designed to spark creativity in the minds of young aspiring authors, and help them work under pressure.

The contest will follow the unique format outlined below.

This will begin in advance from Wednesday, 3rd of April (from 12pm), giving everyone ample time to submit their entries.

All entries (poetry, prose, play, etc) for this round should be submitted on our website via this link:

Ensure your entries (300-500 words) bear birthday themes or special messages in honour of the celebrant.

You can start working on your entries today!

This will begin on Saturday, April 6, 2019. The organization decided to adopt the format used for the Group Stages of the FIFA WORLD CUP, in which teams are put into groups and are made to compete against each other in a series of matches.

In the group stage, contestants will compete within four groups of four members each (will be expanded to eight or more groups in the future). Each group will play a round-robin tournament, in which each contestant will be scheduled for three literary matches against other contestants in the same group. This means that a total of six matches are played within a group. The top two contestants from each group will advance to the knockout stage.

If at the end of the group matches more than one contestant remain level the ranking among these contestants will be determined as follows:

1. Greatest number of points in head-to-head matches among those contestants;

2. Ethical control points, defined by the number of yellow and red cards received in the group stage:

a. Yellow card (for dissent of any kind during the group stage): minus 1 point

b. Indirect red card (as a result of a second yellow card): minus 3 points

c. Direct red card (unruly behaviour of any kind during the group stage): minus 4 points

If any of the contestants remain level after applying the above criteria, their ranking will be determined by the drawing of lots.

The knockout stage will be a single-elimination tournament in which teams play each other in one-off matches. It will begin with the 3rd round in which the winner of each group plays against the runner-up of another group. This will be followed by the fourth round, the third-place match (contested by the losing semi-finalists), and the final.

Those that advance to the 3rd round would be provided with a picture. The writers are to come up with a literary piece in line with the picture’s theme. Holds on Sunday, April 7, 2019.

This is similar to the 3rd round but instead of a picture, an audio will be played for contestants to write on. Holds on Monday, April 8, 2019.

In this round, which is the final round scheduled to hold on the D-Day April 9, 2019, those that advance are given a video that they are to write on. The winner of this round will be declared winner of the contest.

NB: Rounds 2-5 will take place in the WhatsApp Group. Each candidate shall have no more than 10 mins to write and submit their entries for these rounds. Only original and creative pieces shall be entertained. Plagiarism is not allowed!

Prizes shall be provided by the celebrant. Anyone willing to assist in sponsoring a prize should let Dr. Ken know.

NB: Participation in this contest is open to all registered members of the organisation. The contest will be expected to last a duration of one month in the future. Prizes shall also be reviewed upwards.

ANSA… for the love of writing